I’ve been aware of the annual SELF Magazine Workout in the Park event for quite some time now – it’s  been going on for 21 years and I’ve written about it several times, from my Miami newspaper days until now. In all that time that I’ve been aware of this annual, multi-city event, I’ve never been. Never even tried to go. Why?

Because I have a fear of group exercise. 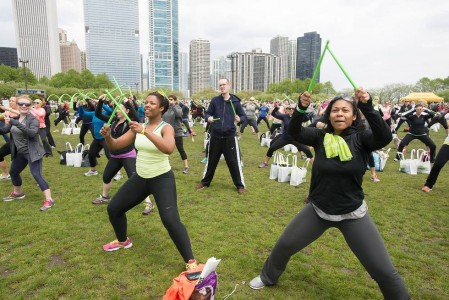 Photos courtesy of SELF Magazine’s Workout In The Park

It’s OK, I can talk about it. I have this phobia of working out in a group setting, where I feel like I won’t be able to keep up. I feel like I’m too sweaty, less graceful, noticeably incapable.

Basically the only reason I went to the SELF Magazine Workout in the Park this weekend in Chicago, was to interview Bob Harper, fitness guru best known as the-one-who-doesn’t-yell-at-people on The Biggest Loser, New York Times #1 best selling author of books like The Skinny Rules: The Simple, Nonnegotiable Principles for Getting to Thin

. His latest is Skinny Meals: Everything You Need to Lose Weight-Fast!, and I totally bought a copy at the event so he could sign it. He’s that convincing. I wanted to ask him advice for someone like me, who feels like she’s perpetually at the beginning of The Journey. And I’m happy to report that Bob Harper isn’t stuck up or intimidating in the slightest. He’s lovely, down to earth, regular, approachable and sweet as pie. 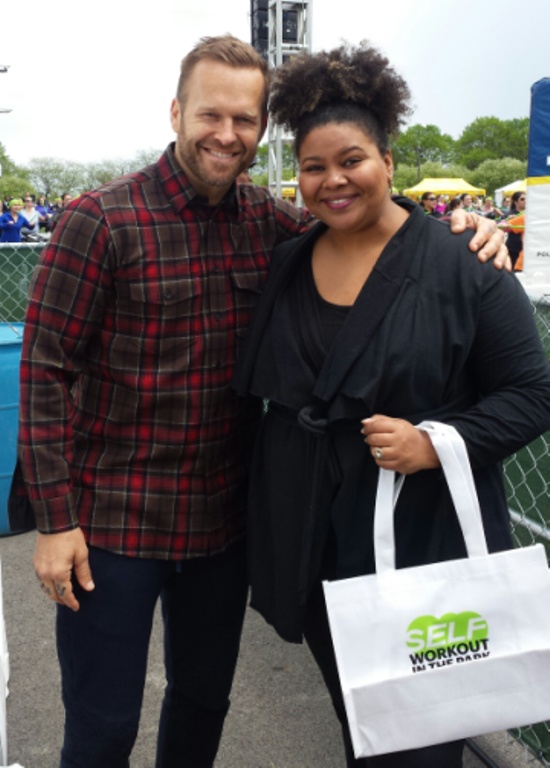 The first thing we broke down was my fear of group exercise classes. My fear might be a self-perception thing, according to Bob. I told him my expectations around attending the event and he was all like, “what do YOU think that’s about? Let’s turn the interview around on you.” And admittedly, I did see a lot of regular women like myself, huffing and puffing through the workouts in the park. Seeing so many plus sized women, seeing the range of ages and sizes of people present, made the whole experience seem much less intimidating than I thought. According to Bob, that is true of an event like Workout in the Park, as well as the scene at your local gym or exercise facility.

Bob does Crossfit, and he spoke warmly of that community. He assured me that for the most part, the folks in Crossfit are happy to welcome a new member, especially a new member who seems to not know what they’re doing, or who seems to need help figuring out how things work.

The thing is, I know what my obstacles are. I know my issues are consistency, portion control and discipline. Bob shared a few of his tactics – like competing with himself and setting food or fitness challenges. Like, “today I won’t consume any sugar whatsoever.” Or, “I’m going to drink eight 8 oz glasses of water in the next 24 hours.” I had to ask Bob how his his new book was different or more helpful than other health and fitness books. Bob assured me that this book will inspire me in the kitchen, especially for my problem meals (for me, breakfast and lunch). All of the recipes in his book are under 350 calories and he promises that this doesn’t mean teeny tiny portions. “Listen, I love to eat. I love good food. This isn’t a book that sets unrealistic expectations.” According to Bob, I need to make sure I’m drinking enough water throughout the day – his plan stresses that you should drink two 8 oz glasses of water with each meal, and fill your plate with vegetables. He also stressed that I’ve been doing this thing wrong – it isn’t a case of diet OR exercise. It’s both. And he believes it’s more of one than the other.

“Here’s the thing. I love exercise. Exercise is essential. But I’d say if I had to say what’s more important, diet or exercise, if I had to list the top three things people need to focus on, it’d be diet number one, diet number two, and exercise number three.” 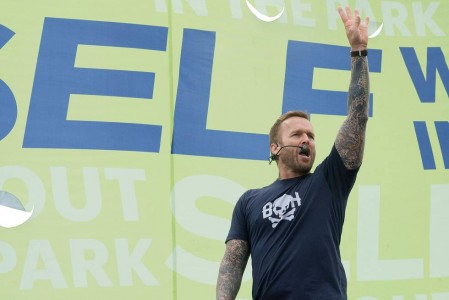 Meeting Bob was awesome and he definitely gave me a lot to think about. After our chat, I decided to explore more of the vendor booths at Workout in the Park. Here were my main takeaways:

– the new Reebok sneakers are super cute and I want a pair or two for the summer! They’re so lightweight and the colors are hot! 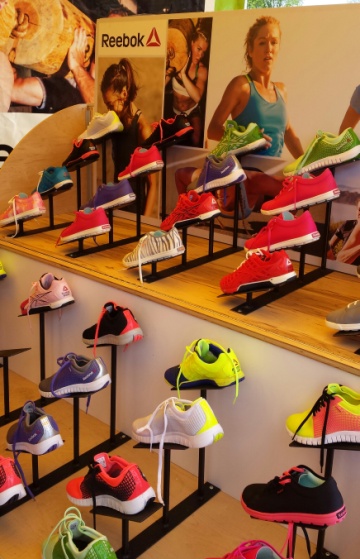 I want the zebra pair in the middle!

– this new antioxidant drink called Bai is 5 calories and purportedly only naturally sweetened. I did not like the coconut flavor at all but the pear was delicious and I’d drink it again.

– I really, really like those Katy Perry Popchips. Kettle corn is my weakess.

– I did find myself wishing that the Lifeway Kefir Bars were a touch sweeter but that’s my area of weakness. The coconut variety was pretty tasty as far as frozen kefir goes.

All amped up from my pep talk with Bob, Deedee AKA The Sassy Peach and I decided to take on an exercise class in the “Quiet Zone,” which featured classes more on that yoga/pilates tip. We decided on a class called Barre Assets, which sounded fun and easy. “Get a ballet body with this workout inspired by the classical movements and techniques that prima ballerinas use to shape and elongate the major muscle groups.” Sounds do-able, right? Well yes, but also no. I developed a new appreciation for the core strength required to be a prima ballerina, I kept finding myself off balance. Also, my flat, damaged feet aren’t ready for that kind of stretching and pointing. Ouch.

I got off easy, all in all — if Bob had his way, I would’ve been “rolling around in the mud” doing his high-intensity cardio workout. He told me to “find the target heart rate zone for your workout“, or he was going to come find me and make me roll around in the mud along with everyone else during his workout! Well that didn’t happen (and I give praises), because I was wiped out after Barre Assets and we made our way out of Grant Park shortly thereafter. 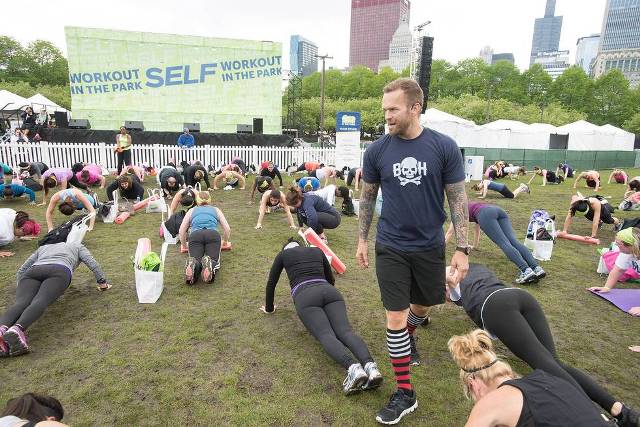 Not this time, Bob!

What did I learn about fitness from the whole experience? Three things:

1 – I am both more and less capable than I realize. And I’ll only become more capable if I keep trying.

2 – I’ve got some getting over to get over, regarding group exercise. I really could participate and benefit without sticking out as badly as I imagined in my worst case scenario.

3 – It’s really all about inner strength and self discipline. I’ve been working out with my trainer long enough to see the results and the benefit of exercise. Still, I don’t make it part of my ME time. Still, I’m quick to make excuses to myself. Still, it’s the thing-I-never-want-to-do, even though I know it’s good for me and I feel better after doing it. Me and exercise have a difficult relationship. It’s a vicious cycle that only I can break when I’ve made my mind up enough to do it.

« Afrobella is Celebrating Macy’s American Icons!
The Way It Made Me Feel – My Reaction to Michael Jackson’s Hologram At The Billboard Awards »