If he were still with us, today Michael Jackson would be 56. He’s still so loved and so deeply missed, and still so ubiquitous in pop culture. This summer, Love Never Felt So Good was part of the barbecue playlist and in regular rotation in TV commercials. MJ is still with us. Another way he’s still with us, is lyrically. In light of some of the recent headlines at home and around the world, it’s truly striking how poignant his lyrics are. More than ever before, it’s like Michael is speaking to what’s happening in the world. 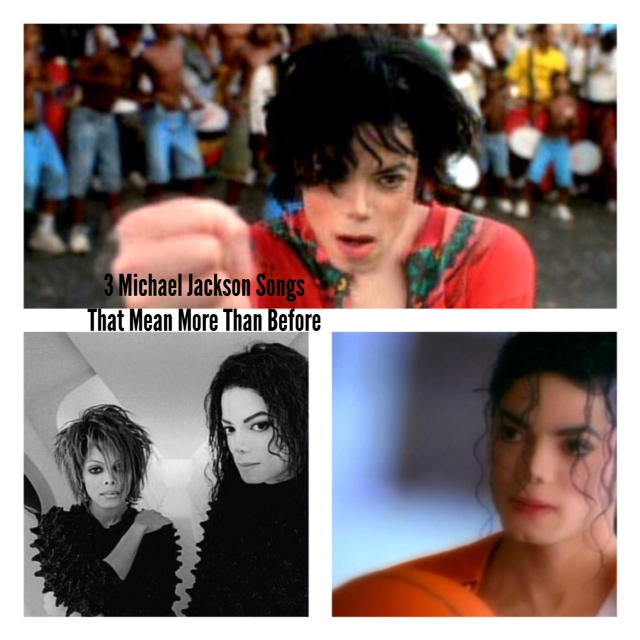 That’s just one of the many things I love about him. Michael Jackson was undoubtedly a wealthy man in his life but he never made music that was materialistic or shallow. His lyrics were about real life. Love, life, often what he was going through in the spotlight, and current events. Some of MJ’s lyrics reveal, the more things change, the more they stay the same. Check out these 3 songs for example.

– They Don’t Care About Us

“Tell me what has become of my rights
Am I invisible because you ignore me?
Your proclamation promised me free liberty,
Now I’m tired of being the victim of shame
They’re throwing me in a class with a bad name
I can’t believe this is the land from which I came..”

Michael came out with strong statements about inequality and police brutality, but this song got swept up in lyrical controversy and his larger point was forgotten. In light of recent events in Ferguson, New York, and elsewhere, this song has been hitting me extra hard lately.

“Tired of injustice
Tired of the schemes
The lies are disgusting
So what does it mean?
Kicking me down
I got to get up
As jacked as it sounds,
The whole system sucks”

Scream was SUCH a big deal when it came out, but the message of the song was definitely not the main focus. It was all about the super expensive video and the fact that Michael and Janet were collaborating for the first time, not the lyrical content.

“I asked my neighbor for a favor, she said later
What has come of all the people, have we lost love of what it’s about
I have to find my peace cause no one seems to let me be
False prophets cry of doom, what are the possibilities?
I told my brother there’ll be problems, times and tears for fears
But we must live each day like it’s the last”

Who knew Jam was so deep? To my mind this song was more about dancing and basketball than a message about the need for unity and community to combat against apathy and destruction.

Michael Jackson did a lot in his time on earth and he left us with messages to consider, and songs that will live forever. Even while we danced and sang along, the message was bigger and deeper than the surface revealed.

We will forever miss you, Michael.

« #GetWellMeechy! An Update on Meechy Monroe and How We Can Help
5 Helpful Moving Tips From Someone Who Just Moved And Knows Moving Is The WORST »